Matt needs a plus one for his sister’s wedding and as always Kieran is right there at his side, as always-  there when needed,  hoping, as always, that this will be the time that Matt actually sees him for more than just a best friend. After a lifetime of unrequited attraction, Kieran is used to taking a back seat to the drama that follows Matt. He has made the choice to move forward and live his life for himself, but Matt is at a crossroads in his own life and he isn’t going to make that easy.

These young men were so easy to fall for. Even without the romantic complication that was bound to occur in the story, it was obvious from word one that these two care deeply for one another. They see the potential in each other that noone else around them sees and they actively push each other to be more, to be better.

While ‘secret crush- friend to lovers’ is a mildly over saturated trope, the storytelling in this book is terrific. The author was able to show the strengths, flaws, and insecurities of the MCs beautifully, while leaving plenty of space for the story to unfold.  Placing them against the backdrop of Matt’s dysfunctional family was brilliant way the let their changing relationship shine and gave them a jumping point for the emotional growth that lets the story play out.

I dearly loved how the author was able to translate the visual medium of dance to the written word. The image of a shadowed dancer against a beach sunset is nothing short of painting with words and as in so many other scenes where Kieran danced, it so perfectly captured the emotion of the moment. Not just his own joy, but also the visceral reactions of those around him, most especially Matt who never needed to be convinced of his friend’s talent.

All in all this a sweet but angsty, coming out/coming of age romance between a couple of endearing leading men

Can a Spanish siesta make Matt see his best friend the way Kieran’s been hoping he would for years?

Matt Robinson just got dumped. Again. With his sister’s wedding on the horizon, he needs a plus one.

Kieran Barker has been in love with his straight best friend for far too long. It’ll never happen. Having already been left behind when Matt went to university, Kieran can’t take more heartbreak.

So when Matt invites Kieran to spend a whole week with him on the island of Majorca, Kieran can’t let himself think there’s more to it than lads on tour. All he can do is play the field to take his mind of the hot, rugby honed body of his oldest mate. Sexy men are in abundance in Magaluf, right? Matt only wants to cop off with the bridesmaid anyway.

But when Matt’s overprotectiveness about Kieran’s late-night escapades borders on jealousy, can he even dare to think that there’s more to their years of flirtations than simple bromance?

And can Matt really acknowledge his feelings when they’ll soon be returning to England, with him back to the university rugby team and two hundred miles away from Kieran.

“Shit.” Matt grabbed Kieran by the arm, and shoved him back into the elevator, slamming his hand on any old button.

The elevator shunted and they both had to grab the handrail running along the lift.

“It’s going down!” Kieran widened his eyes. “How is it going down?”

Matt didn’t say anything. His heart thumped and the foggy wooziness from the alcohol he thought hadn’t affected him crept up to make his head spin. The doors opened into a dark space. A basement, maybe? A cleaning closet. He’d hit the sodding service call button.

Kieran reached out to hit the G but Matt grabbed his arm, preventing him then yanked them both out and into darkness.

The elevator doors closed, the lift moving up, surrounding them in silence. Kieran stared at him, eyes widening. Matt drifted his hand from Kieran’s mouth but held a finger to his lips.

“What the fuck?” Kieran mouthed.

Matt stepped farther into the dark space, checking the surroundings. He breathed a sigh of relief when he discovered they were alone then turned back to face Kieran./

“Why have you shoved me in a fucking broom cupboard?”

Matt’s chest rose with the force of his inhalation. He tried to calm his thrashing heart. His invasive thoughts. His fear. His nerves. He couldn’t find any words. How could he explain? What would he say when he didn’t understand any of this himself? Rationality drowned by his thumping pulse, he closed his eyes to try to steady his breathing.

“Matt?” Kieran’s voice was distant but calming. “Matt, you okay?” He placed his palm to his forehead. “Is it sunstroke?”

Matt opened his eyes at the gentle touch, at the warm breath trickling onto his skin, at the unwavering concern in shaking lips.

Kieran lowered his hand but Matt grabbed his wrist.

“Matt? You’re scaring the fuck out of me.”

“You think I ain’t scaring myself right now?”

“Why?” Kieran’s question was shrouded by his sharp swallow.

“Because I don’t know, Kier. I don’t know what’s happening.” He squeezed desperate fingers around Kieran’s wrist, glancing down to the swirls of his tribal tattoo and his breath hitched. “What’s happening to me?”

“You drank the tap water?”

Matt hefted out an exasperated sigh.

“Then, you’re gonna have to tell me.” Kieran licked his lips. “Because I’m all out of ideas.”

Matt rubbed his thumb along the underside of Kieran’s wrist, eyes down, not able to look at Kieran as he contemplated what he should do. What he needed to do. What he was so desperate to do that it consumed his every breath.

Matt cut off Kieran’s words with a kiss.

Kieran didn’t respond. He stood there, eyes wide as if he couldn’t believe what was happening. Frozen. Stunned. Accepting Matt’s lips on his. Shit. It was wrong. This was wrong. This wasn’t how it was supposed to be. Fears confirmed, Matt pulled away, sinking back against the wall, telling his thumping heart he was sorry.

Then, he closed his eyes to exhale the words, “You better not be fucking with me.”

Matt met his gaze through the shadowy darkness. “Give me half a chance.” It had meant to be a light-hearted joke. Something to lift the mood. It came out wrong though and Kieran reached for the lift call button.

Matt held out his hand. “Don’t.” He hung his head. “Please don’t. I got this far. I might need help for the next step.”

Kieran dropped his hand away. Then, after several awkward moments of silence, he said, “You kissed me.”

“You put your lips on mine.”

“You…were going to put your tongue in my mouth.”

“Are you a fucking snog pundit? Do you commentate all your kisses in the dark?”

“No, Matt!” Kieran raked a hand through his hair. “Just the ones that come from my best fucking mate.” He slapped Matt’s chest. “My straight best mate.”

“I don’t recall ever saying I was straight.”

“You don’t have to, Matt. It’s implied in your heterosexual relationships.”

“I’m going to choke you with bog roll in a minute.”

“We’re in a fucking closet!” Kieran flapped his hands at shelves and shelves of toilet paper and cleaning products. “Which is so damn ironic, I can’t deal.”

Brought up in a relatively small town in Hertfordshire, C F White managed to do what most other residents try to do and fail—leave.

Studying at a West London university, she realised there was a whole city out there waiting to be discovered, so, much like Dick Whittington before her, she never made it back home and still endlessly searched for the streets paved with gold, slowly coming to the realisation they’re mostly paved with chewing gum. And the odd bit of graffiti. And those little circles of yellow spray paint where the council point out the pot holes to someone who is supposedly meant to fix them instead of staring at them vacantly whilst holding a polystyrene cup of watered-down coffee.

Eventually she moved West to East along that vast District Line and settled for pie and mash, cockles and winkles and a bit of Knees Up Mother Brown to live in the East End of London; securing a job and creating a life, a home and a family.

After her second son was born with a rare disability, C F White’s life changed and it brought pen back to and paper after having written stories as a child but never had the confidence to show them to the world. Now, having embarked on this writing journey, C F White can’t stop.

So strap in, it’s going to be a bumpy ride. 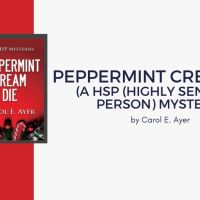