The Making of Kelly Quinn
by Debra Sennefelder

One question I often get is how stories and characters come to me. So today, I’d like to talk about how the character of Kelly Quinn came to be. She’s the fashionista-turned-amateur sleuth in my Resale Boutique Mystery series. She’s a hoot to write, and I’m so grateful that somehow, someway, the nugget of her character graced me one day, allowing me to create (in my opinion) a fun, multi-dimensional, strong female character.

Kelly came to me several years ago when I wrote a short story on a snowy weekend. Back then, she had a different name and was tracking down a missing dog only to discover the dog’s owner had been murdered. I submitted the short story to an anthology, and it was rejected. Disappointed, I tucked the story away for a while and continued working on other projects. One of those projects was a culinary-themed cozy mystery series, Food Blogger Mysteries, that I sold to Kensington. A couple of books into the series, I had an idea to pitch another series to my editor, so I went searching into my file of ideas, and I pulled out my fashionista short story.

By the time my proposal was written (which consists of a blurb, a synopsis, and three chapters), things had changed from the short story.  Kelly got a new name, a new career, and the devastating news her beloved grandmother had died. In the short story, she hadn’t inherited her granny’s consignment shop. I also fleshed out Kelly’s life before she returned to her hometown of Lucky Cove, New York to claim her inheritance.

Kelly has a sister who is a lawyer. She has a love for fashion that goes way back to her teen years. Her interest in the latest trends had her hitting the mall after school and on weekends. She was flighty and spontaneous, and those two things led to a tragic night when she and her friend, Ariel, went to a beach party. That event had been the primary reason Kelly did her best not to come back home often. Once she left for college, fashion school in NYC, she only returned to Lucky Cove for holidays, and she was in and out of town fast.

With a clearer picture of Kelly forming, I continued plotting the story and filling Lucky Cove with its residents.

First up is Pepper Donovan. She’s been the only employee at the Lucky Cove Consignment shop for over twenty years. She worked side-by-side with Kelly’s grandmother, and they became the closest of friends. Pepper is having a hard time understanding why Kelly wants to change things in the store.

There’s Kelly’s uncle, Ralph Blake. He was named the executor of the estate by his mother. Ralph expected to inherit the shop, which sits on prime real estate in Lucky Cove and would sell for a very nice sum. Lucky Cove is a quaint Long Island town that’s not as flashy as the Hamptons but still draws very wealthy and successful Manhattanites during the summer months.

We also meet Ralph’s most-recent wife, Summer. She’s a model-turned-Pilates studio owner and can’t understand why her adopted hometown needs a thrift store. Her cousin, Frankie, runs a seasonal restaurant and can be a handful. Luckily Kelly has her best friend, Liv Moretti, to lean on when things get out of control. And since Kelly gets herself mixed up in murder investigations, that happens quite a bit.

Just a quick note as I wrap up this guest post about the short story that had been rejected for the anthology. I was able to turn it into a novella, WHAT NOT TO WEAR TO A GRAVEYARD. Looking back, the rejection wasn’t all that terrible. Thank you for spending a few minutes with me today and reading about how I created Kelly Quinn. I hope that you will enjoy her newest book, BEAUTY AND THE DECEASED.

Kelly Quinn’s Long Island consignment shop offers high style at secondhand prices—but when a body is found on the beach, she needs to start hunting for a wolf in sheep’s clothing . . .

Kelly is thrilled when she gets a visit from a cousin she hasn’t seen in years. Becky’s cosmetics company is taking off, and she just might have laid the foundation for a big-money buyout. It’s a time to celebrate—but Kelly is heartbroken when a killer puts an end to their happy reunion during a mysterious midnight meeting near the shore.

Despite multiple warnings to steer clear, Kelly starts shadowing a variety of suspects both inside and outside the beauty business—when she isn’t busy filling the racks of the Lucky Cove Resale Boutique with lots of new inventory from a local shopaholic. Gossip and accusations are flying, but there’s no glossing over this ugly crime, and she’s going to make sure the culprit faces justice…

Debra Sennefelder is an avid reader who reads across a range of genres, but mystery fiction is her obsession. Her interest in people and relationships is channeled into her novels against a backdrop of crime and mystery.

Her first novel, THE UNINVITED CORPSE (A Food Blogger mystery) was published in 2018. When she’s not reading, she enjoys cooking and baking and as a former food blogger, she is constantly taking photographs of her food. Yeah, she’s that person.

Born and raised in New York City, where she majored in her hobby of fashion buying, she now lives and writes in Connecticut with her family. She’s worked in retail and publishing before becoming a full-time author. Her writing companion is her adorable and slightly spoiled Shih Tzu, Connie.

December 3 – Escape With Dollycas Into A Good Book – AUTHOR INTERVIEW

December 4 – I’m All About Books – SPOTLIGHT 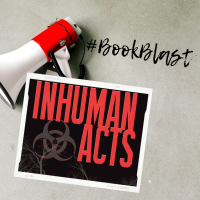