“Tell me, if you can, Chief Deputy, has there been any progress regarding the investigation into the vandalism at Olivia Zavala’s gallery?”

Sheriff Stoker had dictated that all such queries were to be met with the standard “no comment pending further investigation,” and Chief Deputy Vela knew he should stick to that.  Nonetheless, Vela was harboring a great deal of frustration in connection with that case, so the truth came out despite his better judgment.  “Sheriff Stoker has assigned that case a low priority.  Extremely low.  He feels all of our resources should be focused on the shooting.”

“I understand that.  Still—”

He interrupted her.  “There’s no point arguing with me about it.  He’s the boss.”

Kate’s face became pinched with distaste.  “Has he moved it to the back burner, or completely off the stove?”  Though Vela did not respond, the expression on his face suggested that the sheriff would do no more than wait for a solution to the vandalism case to land in his lap.  “Very well, then.”  Sighing, she handed the document folder to him.  “I wanted to show these to you.”

“Yes.  The man is someone we noticed at the gallery on the day of Lucy Celek’s exhibit.  He seemed particularly interested in the mural, even somewhat agitated by it.  The woman caught my eye on two separate occasions that same day.  I mentioned both of them to the deputy who investigated the vandalism.  At the time, I thought one of them could be responsible for the vandalism.  Now we wonder if one of these people might have something to do with either the defacement or the shooting.  Or, possibly both.  We hoped you might consider them worth taking a closer look at, assuming you can identify them.”

“Yes.  That would be me and several of my friends.  We inspected every photo we could find that was taken on the weekend of the photography festival and came up with these.  They were all obtained from social media pages that are public.  We captured all the metadata and the entire profile of the source accounts.  If it comes to it, the photos should be admissible as evidence, although you have to go back and retrace our steps yourself.  Of course, we didn’t have access to any available security footage from shops along Main Street that day like you undoubtedly will.”

Vela arched an amused eyebrow.  He imagined a group of eager, graying women poring over photos with magnifying glasses.  “You and your friends haven’t decided to become a bunch of Miss Marples, have you?” he asked puckishly.

Kate smiled.  “Don’t be ridiculous, Chief Deputy Vela.  Though, I award you points for knowing who Miss Marple is.”

He looked at the photos, going back and forth between them, and then paused over one picture of the man.  In most of the images, the man’s face was partially obscured by the shadow of his ball cap.  Then, in the background of a photo someone had taken of a group of teenaged girls, the man’s face was visible.  “I think I recognize this guy.”  He pulled his keyboard toward him.  “Give me a moment.”  He logged into his computer and spent several seconds typing and clicking his way to the information he sought.  “Ah-ha.  Hello, Billy Doe Jackson.”  He angled his computer monitor so that she could see the screen.

“Billy Doe?  Good heavens.  What could his mother have been thinking?”  She put on her reading glasses and took a good look at the photo on the screen.  “Yes, I believe that’s him.”

Kate’s retirement is going well…except for two murders, a mysterious drone, and a friend who pokes a hornet’s nest of criminal activity. -The Light Catcher Murders by @JoCassieMcRae1 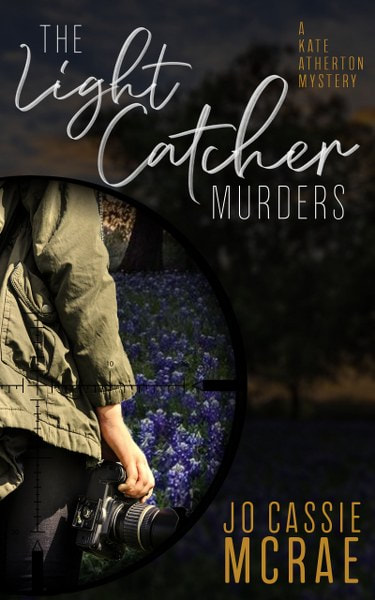 Kate Atherton’s idyllic retirement is going well…if you don’t count the two murders, the mysterious drone, and her photographer friend who manages to poke a hornet’s nest of criminal activity, that is.
Nestled in the scenic Texas Hill Country, the cozy town of Wheaton Creek seemed to Kate Atherton an idyllic place to escape the world’s harsh realities. And then there was the first murder.
Kate once enjoyed a long, successful career with a specialized, highly secret federal intelligence agency. Crises in both her personal and professional life drove her to early retirement and, ultimately, to Wheaton Creek, the perfect place for her and her former-military husband to escape what had come to feel like a world made up of wars, hatred, fear, and untimely death. And, at first, the escape was all Kate had hoped for. Then murder came to Wheaton Creek—a crime that a corrupt county sheriff seems determined to pin on Kate’s photographer friend, Lucy Celek.
Lucy’s work has been chosen to appear at a prestigious photography festival, a festival that could take her from amateur to professional standing. All goes well until the gallery displaying her work is broken into, and one of Lucy’s photographs is vandalized. A week later, the man Lucy suspected of destroying her photograph—a fellow photographer who was angry that his own work was not chosen by the festival committee—is murdered. Faced with a sheriff who shows little interest in expanding his list of suspects beyond Lucy, Kate feels she must dust off her puzzle-solving skills to find the real killer. Murder is just the beginning, though, as Kate’s amateur sleuthing begins to reveal a tangled web of crimes that go beyond anything she could have imagined.
Goodreads * Amazon 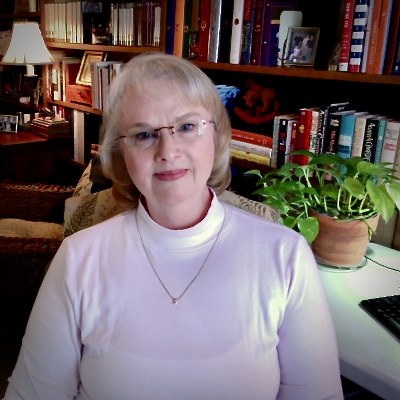 Jo Cassie McRae is a native Texan who has lived near Austin on the edge of the Texas Hill country for over 30 years. In addition to writing, McRae loves to read, garden, and cook. Like Kate Atherton (The Light Catcher Murders), McRae’s bookshelves overflow with history books, biographies, historical fiction, and mystery novels. Unlike Kate, McRae does not have a mysterious, secret former career, having worked instead as a rather ordinary legal assistant at an Austin law firm.
Website * Facebook * Twitter * Bookbub * Amazon * Goodreads

Jan 29
Character Madness and Musings
IndiePowerd by No Sweat Graphics

Feb 2
Books all things paranormal and romance
Momma Says: To Read or Not to Read