Kate Atherton’s idyllic retirement is going well…if you don’t count the two murders, the mysterious drone, and her photographer friend who manages to poke a hornet’s nest of criminal activity, that is.

Nestled in the scenic Texas Hill Country, the cozy town of Wheaton Creek seemed to Kate Atherton an idyllic place to escape the world’s harsh realities. And then there was the first murder.

Kate once enjoyed a long, successful career with a specialized, highly secret federal intelligence agency. Crises in both her personal and professional life drove her to early retirement and, ultimately, to Wheaton Creek, the perfect place for her and her former-military husband to escape what had come to feel like a world made up of wars, hatred, fear, and untimely death. And, at first, the escape was all Kate had hoped for. Then murder came to Wheaton Creek—a crime that a corrupt county sheriff seems determined to pin on Kate’s photographer friend, Lucy Celek.

Lucy’s work has been chosen to appear at a prestigious photography festival, a festival that could take her from amateur to professional standing. All goes well until the gallery displaying her work is broken into, and one of Lucy’s photographs is vandalized. A week later, the man Lucy suspected of destroying her photograph—a fellow photographer who was angry that his own work was not chosen by the festival committee—is murdered. Faced with a sheriff who shows little interest in expanding his list of suspects beyond Lucy, Kate feels she must dust off her puzzle-solving skills to find the real killer. Murder is just the beginning, though, as Kate’s amateur sleuthing begins to reveal a tangled web of crimes that go beyond anything she could have imagined.

Tessa Boatwright leveled eagle-sharp eyes upon B. D. Jackson as he ambled toward her appointed position near Lucy’s mural-sized photograph, which filled the back wall of the gallery. Ostensibly there to answer questions, Tessa also made it her duty to keep inquisitive children and unthinking adults from touching the expensive photograph. As a painter who had struggled for years before achieving critical and financial success, she was keenly aware of the thin edge between amateur and professional status that Lucy teetered upon. Tessa wanted to help her friend, and she was determined that every visitor appreciate what was special about Lucy Celek’s photographs. And B. D.’s air of indifference to the art around him made Tessa suspect him of needing to be educated.

For his part, B. D. hardly noticed Tessa who—to his boorish young eye—was merely an older woman with graying hair. Though he had no interest in the gallery aside from its convenience as a place to duck the attention of the sheriff’s deputy, the mural, which was scaled so that B. D. almost felt he could step from the gallery into the scene, had captured his interest the moment he had spotted it. The photograph showed an iconic Hill Country scene—a live oak tree, stately and alone on a distant hill that was carpeted with bluebonnets, Indian paintbrush, and pink evening primrose. The sun was setting behind the tree, bathing the scene in glorious luminous hues. B. D. removed his sunglasses so he could see the mural more clearly. He stood staring, his frown deepening as the realization dawned that he had been mistaken. The sun had to be rising, not setting. B. D. knew what direction the photographer had been facing because he knew this place.

“She makes wonderful use of light, doesn’t she?” Tessa asked.

“Huh?” B. D. barely heard the question. With his attention riveted by the mural, he managed a sideways glance in Tessa’s direction.

“It’s what sets her photographs apart,” Tessa persisted. “It’s what, in my view, makes them art instead of just pretty pictures. See how the brightest light starts as a point just at the horizon and then spreads out to touch everything with the full spectrum of new light? You can almost see each ray, each with its own particular hue.” When B. D. did not respond, she gestured toward the mural like a prize model on a game show. “Here,” she indicated with a graceful wave of her hand. “It’s as though everything in the world starts here, at this point, at this moment of a new day. Like the hope of a new birth rendered upon the landscape. Photographers have often been called ‘light catchers,’ and it’s such a good name for them, I think. Especially for Lucy.” Tessa glowed with pride as she gazed upon the mural.

B. D. turned his full attention to Tessa now, his expression saying that he wondered what this crazy old woman had been smoking.

Tessa, who was in full steamroller mode, did not notice the look. “And, see here,” she directed as she pointed to the portion of sky filling an upper corner of the mural. “See how she caught that exquisite moment when the sky explodes into daybreak hues? And see how she brings us the diaphanous play of light and color on the streaks of cloud?” Tessa stepped back, admiring the clouds. “Her inclusion of the distinctive clouds is a wonderful touch, I think. They lift the composition out of the ordinary.”

B. D. was staring at the clouds, too, though not because he had any particular appreciation for their aesthetics. He took a step closer to the mural, focus narrowed, and then stepped back again. It can’t be, he thought.

Tessa clasped her hands over her bosom and stood beaming at the young man. “You see it, don’t you?” she asked, the pleasure in her voice barely controlled. Her effort at instruction had not been wasted.

The smile melted from Tessa’s face, and she blanched at the sharpness of his tone. “Well, the artful use of light, of course.”

“You’re a crazy old woman,” B. D. snapped. “Get away from me.” He scowled at the mural. “Goddamned picture. Goddamned photographers!” Red-faced with agitation, he turned on his heel and stormed away.

Tessa stared after him. “Well, screw you and the horse you rode in on!” she muttered a bit too loudly. A young mother glared at her and quickly steered her children away.

Jo Cassie McRae is a native Texan who has lived near Austin on the edge of the Texas Hill country for over 30 years.  In addition to writing, McRae loves to read, garden, and cook.  Like Kate Atherton (The Light Catcher Murders), McRae’s bookshelves overflow with history books, biographies, historical fiction, and mystery novels.  Unlike Kate, McRae does not have a mysterious, secret former career, having worked instead as a rather ordinary legal assistant at an Austin law firm. 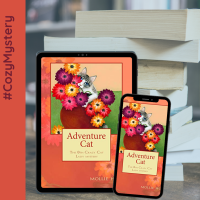