They’re Worth Posting About Again

Title/Author: Give the Devil His Due (A Tarot Mystery) by Steve Hockensmith with Lisa Falco
Genre: Cozy Mystery
Publisher: Midnight Ink
Date of publish: April 2017
Pages: 360

Reformed con artist-turned-tarot reader Alanis McLachlan gets paid for predicting the future—too bad she didn’t see all the trouble in hers. First a figure from her past tries to drag her back into the life of crime she thought she’d left behind. Then a new suitor tries to sweep Alanis off her feet, forcing her on-again, off-again romance with hunky teacher Victor Castellanos to hit the skids. And then there’s the little matter of the client who gets an ominous reading from Alanis . . . and is promptly murdered. Danger is in the cards for Alanis, and she’ll need all her skill at reading people and reading tarot if she’s going to survive.

Owner of the White Magic Five and Dime Shop, Alanis is just trying to get by, set a good example for her younger sister and make up for the wrongs of her con artist mother. Things get bumpy when a mysterious stranger gets a tarot reading from her, that seems to be threatening, and then ends up dead on the same night that her long dead step father  shows up out of the blue. The adventure will see her life threatened by an old lady with a less than firm grasp on an uzi, have her investigating an old art theft and willing to deal with maybe even the devil himself to see that her loved ones are safe from harm.

Though not necessarily a bad thing, this is is not a typical cozy. The heroine is not a classic good girl, there is loads of profanity and plot just can’t seem to decide which direction it wants to go in. There is this great magic shop with a tarot spin, and there is a con a minute theme running a long game with Biddle at one end and GW at the other conning the money guy, looking for one last score, etc. Finally, there is the private eye vibe with Alanis being undercover along with her teen cyber detection team and the obvious mob connections. It does all tie together, but it makes for a very busy un-cozy like story line.

That said there are many great things about the book to recommend it, including a cast of clever and surprising characters. The main characters are fabulous, but they are nothing compared to the color characters; a  stodgy lawyer with a billing fetish who knows more than he is willing to tell, an investigative reporter with an unexpected ax to grind, an art collector who isn’t what he seems, among others. I also felt that that the tarot cards were a fabulous way to introduce the chapters. I enjoyed seeing what the cards looked like as I have zero experience with tarot in general. This was was a good enough story to make me curious about the first books in the series and I certainly am willing to come back and visit these characters again someday.

Steve Hockensmith’s first novel, Holmes on the Range, was a finalist for the Edgar, Shamus, Anthony and Dilys awards. He went on to write four sequels as well as a pair of bestselling follow-ups to the international publishing sensation Pride and Prejudice and Zombies. More recently, he wrote (with collaborator “Science Bob” Pflugfelder) the middle-grade mysteries Nick and Tesla’s High-Voltage Danger Lab and Nick and Tesla’s Robot Army Rampage. 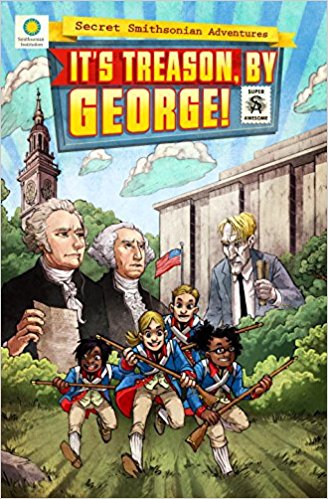 Schoolmates Eric, Dominique, Ajay, and Josephine are in their homes getting ready for a normal school day after two successful time-travel adventures. But the day might not turn out to be so normal after all! The kids’ parents remind them that today is Coronation Day, and when they get to school, they find the Pledge of Allegiance replaced with an Oath to the King. Clearly, something is amiss, and the only way to fix it is to return to the Smithsonian, this time to the National Museum of American History. Their problems don’t end there: the museum’s famed American Presidency exhibition has been replaced with one on America’s monarchs, complete with a portrait of George Washington being crowned as the first king! Enlisting the help of Gilbert Stuart, John Trumbull, and Thomas Jefferson and using their American history smarts, our heroes must try to thwart this wicked plot to change history.