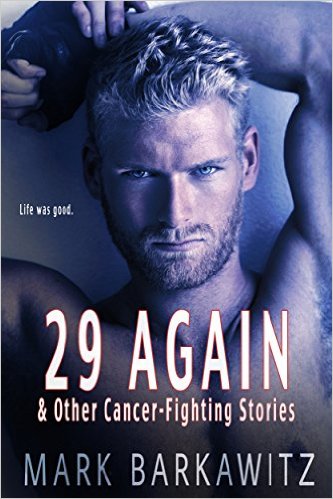 An estimated 1.2 million new cancer cases are diagnosed each year. Chances are someone you know has been touched by the disease in some way. Few words can destroy a life so completely.

29 Again by Mark Barkawitz is not your typical cancer memoir. Sure, it shows just devastating the disease can be to those who have it and to the ones around them, but this book is about the survival of the indomitable spirit. Interspersed with anecdotal stories about the author’s own cancer battle and shared stories about people he has known, are the occasional short stories filled with humor and hope. The title story is about a middle aged man who stumbles upon his college apartment building, having been moved from its previous location to make way for new condos. Exploring the empty rooms, he finds things pretty much as he left when moving out twenty years prior, including a layer of dust of course. He soon realizes that being there has some how made him younger again. Searching around the detritus of his former life he finds a ring lost by a former lover and is inspired to track her down on Facebook, only to find she is final stages of an un-treatable form of cancer. Can he use his new found fountain of youth to prolong her life until a treatment, or better yet a cure, can be found?

Charming, funny, witty, absolutely heartbreaking. From the thrill of beating cancer to the death of an old friend or a story of child who life is being cut short. This very real book offers the range of emotions. Ultimately you will be inspired.

Half the proceeds from the sale of this book are earmarked for donation to the City of Hope. A terrific stocking stuffer for the true survivors on your list.

Goodreads Summary: What would you do with your own Fountain of Youth? A book about cancer that isn’t a bummer! There are few things like a cancer diagnosis to throw your whole world into turmoil. It used to be a certain death sentence. Cancer used to have a way of writing its own stories. But now in many cases, doctors have the tools to rewrite the endings. After trading-in his surfboard for a four-wheeled walker with hand brakes, the author battles for survival against an incurable cancer in the rapidly-improving world of 21st century medicine. Buoyed by an indomitable spirit, with the determination of an athlete, and narrated with self-described “gallows humor,” this inspirational book is a must-read for anyone who has been affected by this life-threatening disease. 50% of all proceeds from this book will be donated to City of Hope.

Mark Barkawitz has earned local and national awards for his fiction, poetry, essay, and screenwriting. His work has appeared in newspapers, magazines, literary journals and anthologies, ‘zines, and on dozens of websites. He has IMDb feature film credits as screenwriter, actor, & associate producer (Mark Bark) for “Turn of the Blade” (NorthStar Ent.) and supporting actor in “The Killing Time” (New World Pictures). He’s taught creative writing classes, coached a championship track team of student/athletes, and ran the 2001 L.A. Marathon in 3:44:42. He lives with his wife and has two kids in Pasadena, CA.